It has been reported that Liverpool legend Jamie Carragher says Manchester United could outshoot Chelsea in tomorrow’s clash. 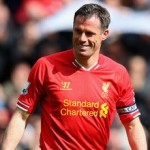 Carragher wrote in the Daily Mail: “With or without Diego Costa, one question is being asked ahead of the weekend’s standout clash: can Manchester United’s defence handle Chelsea’s attack?

“The theory is United’s inexperienced rearguard will find it difficult to shackle the league leaders’ vibrant forwards. No Costa for Chelsea? No problem. Not when Jose Mourinho can unleash, among others, Eden Hazard, Oscar, Willian and Cesc Fabregas.

“Yet here’s another way of looking at things: do United’s forwards have enough to menace Chelsea’s back four? The manner in which Louis van Gaal’s team have defended so far may be a cause for concern but is what is happening at the other end of the pitch a potentially bigger worry?”