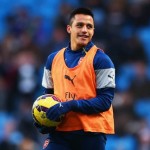 It has been reported that Liverpool legend Jamie Carragher has slammed Arsenal players tweeting dressing room pics after victory at Manchester City.

Alexis Sanchez and Aaron Ramsey both shared the win with Arsenal fans on Twitter.

“It was one giant going to another giant. Of course celebrate, but it’s nonsense all of these team pics in dressing rooms – normally you have them with a cup! It’s nonsense and they need to stop doing it.”