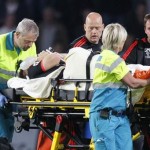 Carragher believes the 20-year-old was among United’s best players this season and the injury has come at the worst possible time for the England hopeful.

“It’s very sad for him and for Manchester United,” Carragher told Sky Sports.

“You think of how well he has performed this season, he has possibly been United’s best player alongside Chris Smalling in the early weeks.

“He was probably about to really cement that left-back position as his own and also with England ahead of the Euros, just as Ashley Cole did for a decade.

“Hopefully for him he can come back for United before the end of the season and then make the Euros, but it could be a long road to recovery.

“Over the next few weeks he has to get over the disappointment and then work to try and get back because he has shown what a good player he is. I think when he returns we will see the Shaw we have seen over the last three-four months.

“He will get there, he is a young, powerful lad and I am sure he won’t cut any corners – Manchester United won’t allow that.”