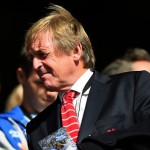 Reports are out claiming that Liverpool legend Kenny Dalglish expects a home win today at Anfield over Manchester United.

Dalglish wrote in his column for the Mirror: “Since Brendan Rodgers changed Liverpool’s formation late last year I have not seen a better team in England.

“Some of the most impressive things about them have been their discipline, organisation and the willingness of everybody to work their socks off when they don’t have the ball – to get back into their position and make it difficult for the opposition.

“They are all key ingredients if you want to have a successful team, and now they are pretty settled in terms of selection, too.

“Liverpool are really organised defensively and if Manchester United don’t get hold of whoever plays off Daniel Sturridge – Philippe Coutinho, Raheem Sterling or Adam Lallana – at Anfield on Sunday, they will have a hard game in front of them.

“That is why I’m predicting a Liverpool win – and I don’t think United will score either.”