It has been reported that Liverpool legend David James believes that Arsenal can’t win the Premier League title without fixing the defensive frailties in front of goalkeeper Petr Cech. 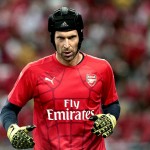 When asked if the signing of Cech can lead the Gunners to the league title, James said: “No. I like Cech, I think he is an amazing goalkeeper.

“However Arsenal’s problem wasn’t fundamentally the goalkeeper. I think they conceded 36 last year, their best before that was The Invincibles in 2004.

“They also concede the most amount of headers, so there’s something in front of the goalkeeper which isn’t quite right.

“The fact Cech has had to produce a number of outstanding performances already this season, kind of suggests there’s still problems going on in front of him.”