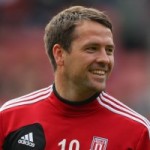 It is said that the Uruguay international has asked the Reds to listen to offers from the Gunners but Anfield great Owen feels he would be better-suited to moving to Barcelona or Real Madrid if he does happen to exit Merseyside.

The 33 year old told BBC’s Sportsweek : “Arsenal are a fabulous club and have got a great heritage but Liverpool are as big – if not bigger,”.

“I’d be very surprised if he were to move to Arsenal. Madrid or Barcelona would make more sense.”

Owen added: “I’m struggling to understand why he would leave and stay in England with Liverpool being the stature they are.

“From Suarez’s point of view, you can understand him if he wants to reach the absolute pinnacle of the game – that’s playing in the Champions League. Liverpool obviously are not in that at the moment.

“Truthfully, can you really see Arsenal winning the Champions League next season or going into the later stages? Unless they buy a good few players then I can’t.”