It has been reported that Liverpool legend Robbie Fowler is disappointed seeing Alexis Sanchez sign for Arsenal. 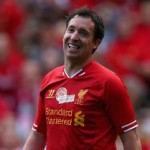 The Reds were also in for the former Barcelona star.

“He is a great player. He is one of the players who have lit up the World Cup,” he told talkSPORT.

“To be honest, I would have liked to have seen him at Liverpool. Fair play to Arsene Wenger and Arsenal for getting him there.

“Arsenal have lacked that striking option up there with [Olivier] Giroud and they are going to be there or thereabouts now.

“They have needed someone up top. Arsenal have been crying out for someone with a little pace up front.” Arsenal Midfielder Mesut Ozil: I’m Among Best In The World!