Reports are out claiming that Liverpool legend Graeme Souness is a big fan of Arsenal star Alexis Sanchez. 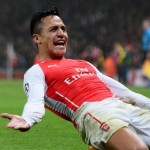 The Chilean scored a superb long-range goal as Arsenal registered a fine 2-0 win over Borussia Dortmund to qualify for the last 16 of the Champions League.

Sanchez has been a revelation for the Gunners since joining from Barcelona in the summer, and has now scored seven goals in his last six appearances for Arsene Wenger’s men.

“He’s a real plus for Arsenal this year,” said Souness. “He’s getting all types of goals, and on top of his goals he makes other people play because he’s infectious.

“He has perpetual motion, he never gives up on any cause, and you can see what his goals mean to him. He lives and breathes football and it must be an absolute delight to play with him, and that makes other people play.

“If you’ve got somebody turning up every day for training – he’ll be first in the group, doing all the running properly, he’ll show great enthusiasm – that will be infectious to the lesser lights in that Arsenal squad, the younger players, the ones that maybe don’t have the same attitude. Players like him are priceless in your group.” It Will Be An Honour To Play For England, Says Almunia