Reports are out claiming that Liverpool legend Graeme Souness has quickly been won over by Manchester United striker Anthony Martial. 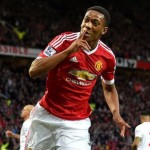 The French international striker struck twice in victory at Southampton on Saturday.

Souness was hugely impressed with the Martial.

“The only thing he’s missing is experience, which he’ll get.” said Souness.

Manchester United Set To Take On MLS All Star Team Martin Hinteregger Honoured To Be Linked With Manchester United