It has been reported that Swansea City striker Wilfried Bony will be the subject of an offer from Liverpool according to reports. 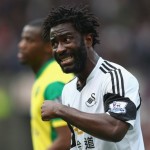 It is said that the Reds will table an £18million bid for the 25-year old Ivory Coast international before he jets off for this summer’s World Cup in Brazil.

Bony enjoyed a successful debut season in the UK, scoring 26 goals in all competitions for the Swans, after joining from Dutch club Vitesse Arnhem last July.

Arsenal and Bayern Munich have both been credited with an interest but it appears as though Liverpool will make the first move as Brendan Rodgers looks to strengthen the squad that finished second on the Premier League table last season.