Interesting transfer news are out claiming that Liverpool are ready to make a bumper bid for Napoli striker Gonzalo Higuain. 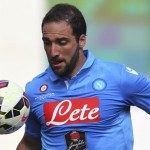 The Daily Star revealed that Liverpool are ready to offer Napoli £31m for Argentina frontman Higuain.

It has been reported that Reds manager Brendan Rodgers wants to bolster his attacking options in January after a slow start to the new campaign.

And reports suggest Higuain, who has previously attracted Arsenal’s interest, could leave Napoli in the new year.