Interesting transfer news are out claiming that Liverpool are being linked with a shock move for Barcelona defender Daniel Alves. 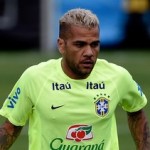 With less than a year to run on his current deal, Barca are anxious to find a buyer for the Brazil international after ruling out renewing his contract.

Alves has been the subject of an approach from Liverpool in recent days, says El Mundo Deportivo, and learned he can be signed for €6 million.

The defender was also in talks with PSG, but they have moved onto other targets.

Alves, 31, had agreed with Barca management to play out the final year of his deal. But the decision has now been made at board level to find a buyer.