It has been reported that Liverpool are eyeing a raid on Arsenal for young striker Chuba Akpom. 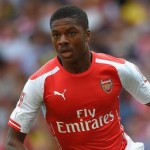 Off contract in June, Akpom is baulking at agreeing terms over a new deal with Arsenal – which has sparked interest across Europe.

The Mirror claims that Liverpool are now keeping tabs on Akpom’s situation along with Premier League rivals Manchester City, Tottenham and Everton.

The striker is free to commit to a pre-contract with any foreign club immediately. Campbell Insists Arsenal Have Given Themselves Every Chance Of Winning Title