Reports are out claiming that Liverpool boss Jurgen Klopp is shopping for a new goalkeeper. 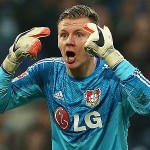 Klopp is reportedly already working on a list of top transfer targets.

The Belgian was signed from Sunderland by former boss Brendan Rodgers in 2012 but he’s failed to impress on Merseyside.

Loris Karius and Bernd Leno were both previously linked with a move to Arsenal.