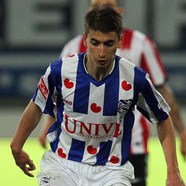 Reports are out claiming that Liverpool and Manchester United are battling for Heerenveen star Filip Djuricic.

The Daily Star claim that the 20-year-old has been a long-term target for United boss Sir Alex Ferguson and even had a spell on trial at Old Trafford in 2009.

It is thought that United were unable to obtain a work permit for the Serbia international at the time, leaving him to join Dutch side Heerenveen instead.

But Djuricic could still yet fulfil his Premier League dream, with Liverpool boss Brendan Rodgers readying a January move for the attacking midfielder.