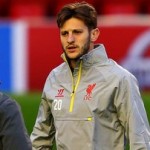 Reports are out claiming that Adam Lallana feels Liverpool’s Capital One Cup win at Bournemouth is ideal preparation for their clash with Arsenal.

The England midfielder believes Liverpool’s result and performance on the south coast means they’ll head into that encounter in buoyant mood.

“This was a small step in the right direction and we’ll take it into the game on Sunday,” he told liverpoolfc.com.

“We were so dominant in the first half, but they were always going to come out and have a bit of a spell in the second half. It was important we got the third goal because if it’d been 2-0 and they’d got their goal, it would have been an interesting last 20 minutes.

“It’s a good bit of momentum we’ll pick up. We’ll take a lot of confidence out of the performance. I thought Raheem was brilliant again – it was great to get him among the goals. We’ve been short in that area, but he’s done a fantastic job for us.”