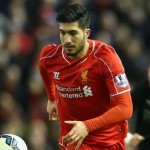 Reports are out claiming that Liverpool midfielder Emre Can admits he came close to signing for Manchester United.

“How do you know that?” said Can when asked if he was aware United were watching him when they beat his former side Bayer Leverkusen 5-0 in the Champions League last season.

“I played very badly against them!” Fletcher : Manchester United Is Strong Enough To Win The Title!