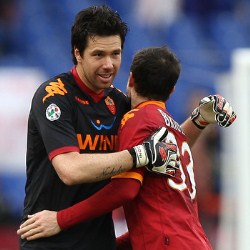 Reports have surfaced that Premier League giants Liverpool are in advanced talks for AS Roma goalkeeper Alexandre Doni.

Il Messagero has reported that the Brazilian keeper has already agreed terms and is hoping to finalise a move to Anfield in the next few days.

The two clubs are now agreeing a fee for the experienced keeper with Roma looking for at least £1.5m for the 31-year-old.

The move looked in doubt earlier in the week after Doni turned down the club’s first offer saying his salary would have been cut by 60 per cent, but the two parties appear to have reached a compromise.