Reports are out claiming that Liverpool are interested in Atletico Madrid defender Toby Alderweireld. 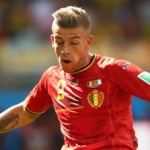 Sky Italia reported that the Reds have officially opened talks with La Liga champions to discuss a deal for the Belgian international.

Liverpool have offered Atletico a fee of £7m for the out of favour defender.

Alderweireld, who is currently at the World Cup with Belgium, has failed to establish himself as first team regular under Atletico boss Diego Simeone.