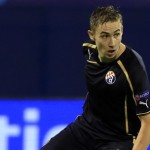 Reports are out claiming that Croatian youngster Marko Rog is interesting Liverpool.

The Sun on Sunday says Liverpool are planning a second bid to sign Rog.

The Reds tracked Rog last season when he was playing for Split but the 20-year-old ended up joining Dinamo Zagreb in the summer instead.

He made his international debut against Argentina in November last year.

Rog is valued at £8m by Zagreb, who signed the starlet for just £4m a few months ago. Liverpool Pushing To Complete The Signing Of Alberto Moreno