Reports are out claiming that Liverpool are planning a shock swoop to sign Barcelona midfielder Alex Song at the end of the season. 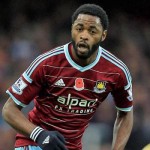 The Cameroon international is currently on loan at West Ham United in a season-long deal and the midfielder has certainly managed to impress since his return to London.

While the Hammers are keen on turning the loan move into a permanent one at the end of the season, it seems that the former Arsenal star is not too keen on facilitating such a transfer to Upton Park.

Nonetheless, the defensive midfielder is expected to leave Barcelona and now according to the Liverpool Echo, it has been claimed that the Reds are eyeing a surprise swoop for the 27-year old.

Liverpool will be in need of a new central midfielder due to the impending departure of long-serving star Steven Gerrard at the end of the current campaign and it has been claimed that the Reds have identified Song as an ideal replacement for their outgoing captain.