It has been reported that Liverpool boss Brendan Rodgers is ready to sell Fabio Borini. 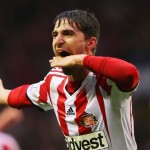 The Daily Star says reports this morning suggest Rodgers is set to rule out a Merseyside stay for the Italian after deciding to move on the £10.5m man.

The Northern Irishman made Borini his first Liverpool signing when he bought him from Roma in July 2012.

A return to Sunderland is likely for the Italy international.