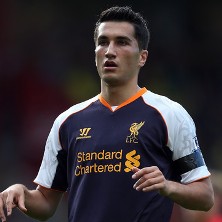 Reports are out claiming that Real Madrid midfielder Nuri Sahin is playing his way into a permanent deal at Liverpool.

The 24 year old Turkish international is on a season-long loan at Anfield and after a rocky start, is now impressing Reds boss Brendan Rodgers.

Merseyside sources say the former Borussia Dortmund midfielder, if he can maintain his progress, will be offered the chance to sign a long-term deal at Liverpool.