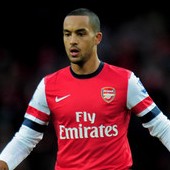 Reports are out claiming that Liverpool are pushing to sign Arsenal attacker Theo Walcott in January.

The Sun reported that Kop boss Brendan Rodgers is willing to pay the England star £100,000-a-week AND play him in the central striking role he prefers.

Liverpool reckon they could land Walcott for just £8million as the unsettled 23-year-old is out of contract next summer.

But Rodgers needs Walcott to resist growing Arsenal pressure to sign a new deal before Christmas.

An Anfield source said: “Theo Walcott and Liverpool would be a perfect fit.

“It’s no secret we are looking for a striker to play with Luis Suarez and Fabio Borini.

“Theo ticks all the right boxes. He is young, he is fast and he has great skills.”