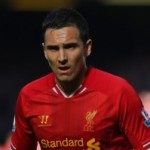 Reports are out claiming that Liverpool are ready to sell Stewart Downing this month.

The Liverpool Echo revealed that the Reds are prepared to off-load the 29 year old England international at a massive loss with Newcastle United having been told they can sign him for a cut-price £5million.

The winger’s representatives have been contacted by the North East outfit to confirm their interest and find out whether he would be keen on a move to St James’ Park.

Downing joined Liverpool in 2009 and has gone on to make a total of 91 appearance scoring 7 goals along the way.

Fernando Torres Ready To Play Through The Pain Barrier Arsenal, Man Utd Prepared To Do Battle For Winston Reid