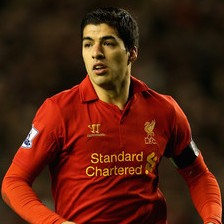 Liverpool have rejected Arsenal’s bid of just over £40 million for wantaway striker Luis Suarez, according to reports.

The Gunners made an offer of one pound over the £40m mark in an effort to trigger a clause in the Uruguayan’s contract, various outlets reported.

Under the terms of the deal that Suarez signed in August last year, any bid over that figure would compel Liverpool to consider the offer and inform the player, although the Anfield club has again decided to reject Arsenal’s advances.

The latest bid is the second from Arsenal that Liverpool have turned down. The Merseysiders believe their star player to be more valuable, with manager Brendan Rodgers saying last week that he considers him to be worth at least as much as Edinson Cavani, who was sold by Napoli to Paris St-Germain for £55m.

Suarez scored 30 goals in 44 appearances last season, but was also on the receiving end of a 10-match ban after he was found guilty of biting Chelsea’s Branislav Ivanovic. He will serve the remaining six games of that punishment when the new season kicks off.

Since that ban was handed out in April, the 26-year-old, who joined Liverpool from Ajax in 2011 for £22.7m, has indicated he would like a move abroad, claiming he has been vilified by the British press and persecuted by the Football Association. Ozil Did Not Look Confident – Ballack