Reports are out claiming that Liverpool have reportedly turned down an offer from Manchester City for Raheem Sterling. 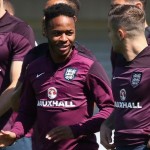 The Times reports that the Reds have rejected a bid of £30million for the wantaway forward who continues to be linked with a summer departure from Anfield.

It is believed that City made the offer, which included a guaranteed £25m and a further £5m in add-ons, earlier this week.

However, Liverpool want £50m for 20-year old Sterling who has so far refused to sign a contract extension on Merseyside.

Sterling is also wanted by Arsenal.