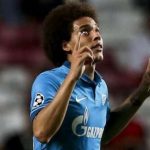 Reports have emerged claiming that Liverpool are again being linked with Zenit St Petersburg’s Axel Witsel.

The Daily Mirror is reporting that the Reds could make a genuine move for the Belgian midfielder in the winter transfer window.

Witsel is out of contract with Russian club Zenit at the end of the season and it is understood that Liverpool may look to set a pre-contract agreement with the 27-year-old in January.

“Witsel doesn’t want to leave us until the end of his deal [but] we have already had an offer.”