Transfer news from the Italian Serie A is out claiming that AC Milan are interested in PSG defender Mamadou Sakho. 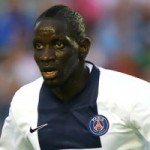 The 23 year-old French international defender has less than a year to run on his PSG deal and is worried about his first team place this season under new coach Laurent Blanc.

Sportmediaset saysclaims that Milan are in contact with PSG about a price for Sakho, but face competition.

Liverpool are also in the mix as Sakho weighs up leaving PSG to secure his place in Didier Deschamps’ French World Cup squad.