Reports are out claiming that Liverpool are reviving their interest in Schalke midfielder Max Meyer. 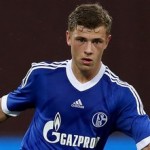 The Daily Express reported that Reds boss Brendan Rodgers is a big fan of 18-year-old Meyer, who bagged seven goals from midfield for the German giants, and sees him as a talent who can provide Philippe Coutinho and Raheem Sterling with real competition.

Meyer, who has been described by the German press as the next Mario Goetze, has one senior cap for his country, and was included in Joachim Loew’s provisional 30-man squad for the World Cup in Brazil.

The Anfield club have been keeping a close eye on Meyer’s progress this season, and reports claim they will launch an £8million bid for his services despite strong interest from Premier League rivals Chelsea and Arsenal.