Interesting transfer news are out claiming that Real Sociedad winger Antoine Griezmann is being heavily linked with a summer move to Liverpool. 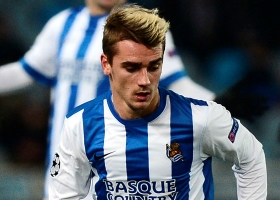 The Daily Star reported on Wednesday that the 23-year old Frenchman has attracted the interest of the Reds after scoring 20 goals in Spain this season.

Griezmann, who was included in France’s provisional World Cup squad this week, has also been on the radar of both Arsenal and Manchester United.

It is believed that Brendan Rodgers is searching for a quality wide-man this offseason as he looks to strengthen the squad which fell just short of the Premier League title this campaign. Roy Hodgson Admits Rooney Knows He Should Be Doing Better