It has been revealed that Liverpool were rocked on Wednesday after it as revealed that Danny Ings had suffered a serious knee injury. 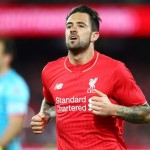 The Reds striker ruptured his anterior cruciate ligament in a standard training session at Melwood and is set to be sidelined for much of the remainder of the Premier League season.

The injury is the second long-term knee problem sustained by a Reds player this week after promising defender Joe Gomez went down while playing for England U21s on Tuesday.

New manager Jurgen Klopp did not highlight the injury during his pre-match press conference ahead of Saturday’s trip to Tottenham which will be his first match in charge of the Merseyside club.

It is a huge blow to the Anfield outfit and even more so for Ings from an individual standpoint as he was determined to force his way into the England squad for next summer’s European Championships after making his international debut in Monday night’s win over Lithuania in Vilnius.

The 23-year-old former Burnley star will have surgery next week and is expected to be out until at least March next year.