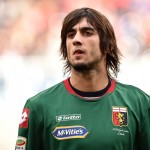 Reports are out claiming that Mattia Perin has declared he intends to stay with Genoa.

The goalkeeper has been linked with AS Roma and Liverpool.

“I am happy at Genoa and want to stay,” he told Telenord.

“I have a contract until 2017 and that’s not a huge amount, but not a small amount either.

“The President knows what I want. I will be at Genoa next season, 100 per cent. You can underline it, I will be playing for Genoa next year.

“I would like that the team not be dismantled every six months, as that way we could work better.”