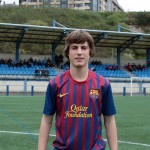 The Spanish giants are trying to sign 16-year-old winger to a long-term deal but the door remains open for Reds.

Barca are trying to sign the 16-year-old, who plays on the right wing, to a new long-term contract, but the Anfield giants are hoping to take advantage of a stand-off.

The Reds are prepared to offer Canos a bigger contract to get him snapped up.

Canos is a wide forward, predominantly playing from the right side, though can also feature centrally as the main striker. He recently turned 16, meaning he would only be eligible for a youth contract in Spain.

In terms of his long-term development, Liverpool would hope that he sees the likes of Pedro, Alexis Sanchez and Cristian Tello as bigger obstacles to his first-team route than Stewart Downing and Co.—which could tip the balance and convince Canos to make the move.

Though the media article relates to Brendan Rodgers wanting him, it seems unlikely that Canos would immediately be a part of the first-team scene for Liverpool, and instead, it would be the academy which benefits first from his presence, headed by Rodolfo Borrell (director of coaching) and Frank McParland (academy director).

Canos has featured at the Under-16 level for Spain and was a prominent player in 2011’s Reino de Leon youth tournament for Barcelona.