Reports are out claiming that Liverpool are ready to pounce for stroppy Barcelona winger Cristian Tello. 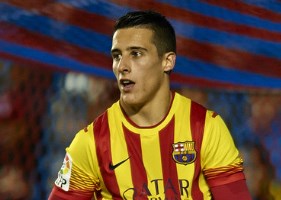 The Mirror reported that Liverpool boss Brendan Rodgers has been given the green light to sign the 22 year old Spanish international.

Tello, a long term Liverpool target, infuriated Barcelona at the weekend after a row with coach Tato Martino which was captured on TV.

That has prompted them to sell Tello who is valued at around £8m with Liverpool his likely destination. Xavi : Barcelona Were Much Better Than Real Madrid!