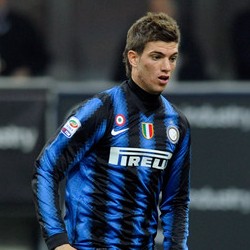 Arsenal were originally thought to be the favourites in the race for the player’s signature, but player agent Renzo Contratto only refereed to Liverpool when discussing his client this week.

“Are Fiorentina, Genoa, Lazio and Liverpool interested in him? Davide wants to stay at Inter, but he just wants to have more trust,” Contratto told fcinternews.it.

Santon is eyeing a move to England after failing to nail down a regular first team place with Inter over the last 12 months.