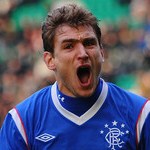 Reports are out claiming that Liverpool will make a renewed bid for Rangers striker Nikica Jelavic in January.

Liverpool director of football Damien Comolli was at Celtic Park on Wednesday night to watch the Croatian in action in the Old Firm derby loss to Celtic and now it has been reported that the Reds will stump up around £10million for his services.

26-year old Jelavic was also watched by Everton and West Bromwich Albion as interest in his services heats up with the winter transfer market approaching.

It is believed that Kenny Dalglish and Comolli are keen to bring in a proven goalscorer in January and Jelavic, who has hit 28 Scottish Premier League goals in 43 appearances, fits that bill.

Liverpool were credited with an interest in the former Rapid Vienna ace in the summer and seem to be keen again whilst QPR, Sunderland and Leicester City are also in the queue.