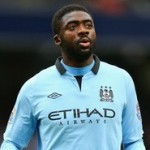 Toure arrived on Merseyside today to conclude the formalities of his move having returned from a postseason tour of the United States with his former club.
The 32 year old is the first Liverpool signing of the summer, although he can not technically register as having joined his new club until July 1.

Liverpool, however, say the deal is ‘agreed in principle’ and have announced the African’s impending arrival.
Brendan Rodgers has been seeking to stiffen his defence following the retirement of Jamie Carragher, so Toure’s experience is seen as a useful commodity.

He is not, however, likely to be Liverpool’s only defensive recruit. The club is still hoping to lure Greek centre half Kyriakos Papadopoulos for what they hope will be a £12 million transfer.