It has been reported that Liverpool have been shocked by the news that Daniel Sturridge is set to be sidelined for a further month. 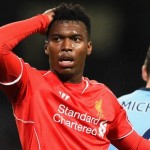 Various reports suggest that the 25-year old striker, who has been out of action for six weeks with a thigh injury, pulled a calf muscle at training on Friday.

The England international was set to return to the Reds line-up for Sunday’s trip to QPR but unfortunately has sustained another soft tissue problem and will be out of action until the middle of November.

Reds boss Brendan Rodgers said: “Daniel has pulled his calf. He’s looking at being out for another two to four weeks.

“It’s a big blow as we were looking forward to welcoming Daniel back. He has worked tirelessly.

“But we have other players training hard and working hard and we will turn to them. It’s why we bulked up the squad in the summer.”

It is believed that Sturridge will miss both of Liverpool’s Champions League fixtures with Real Madrid which has placed a massive doubt on the Anfield club progressing to the Round of 16 of Europe’s premier club competition.