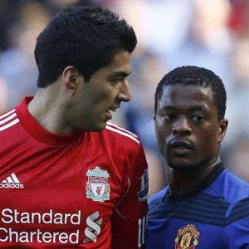 Luis Suarez has been banned for eight matches and fined £40,000 by the FA after the Liverpool striker was found guilty of racially abusing Manchester United defender Patrice Evra during a Premier League match at Anfield in October.

The Uruguay international was found guilty of misconduct after using “insulting words” towards Evra during the game on October 15, including a reference to the France defender’s colour.

The ban is suspended pending the outcome of any appeal lodged by Suarez after an FA Independent Regulatory Commission “found a charge of misconduct against Luis Suarez proven”.

The FA announced the decision against Suarez, who has repeatedly denied the allegations, on its website) after a hearing that began on December 14 at an undisclosed location in north-west England.

The commission said: “Mr Suarez used insulting words towards Mr Evra during the match contrary to FA Rule E3(1). The insulting words used by Mr Suarez included a reference to Mr Evra’s colour within the meaning of Rule E3(2).

“Mr Suarez shall be warned as to his future conduct, be suspended for eight matches covering all first team competitive matches and fined the sum of £40,000.”