Reports are out claiming that Sampdoria have been turned down by Liverpool striker Mario Balotelli. 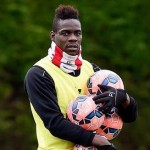 Samp president Massimo Ferrero has admitted he wants to bring Balotelli back to Italy this month.

Ferrero has held several rounds of talks with Balotelli’s agent and had plans of Liverpool covering a percentage of his wages.

However, Sportitalia says the Italian international striker has rejected the proposal today.

The striker is reluctant to return to Italy this season and is now favoring a move to Sevilla.