Rickie Lambert has admitted that he lost his self- belief earlier this season at Liverpool. 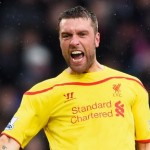 The England international striker scored his first goal for the club in Sunday’s loss at Crystal Palace, but it has taken him 13 games to get off the mark since a £4million move from Southampton.

“It would be silly for me to say I didn’t lose faith in my ability,” said Lambert. “I did question myself in some stages because I know the size of the club. It has taken me a while mentally to get into the right mind frame to be a Liverpool player, I’m not going to hide from that.

“When I came here I probably let myself think I wasn’t going to start every game which I shouldn’t have done. Whoever was in the squad, I should have been thinking I want to be the first-choice striker whether I was up against the best strikers in the world or not.

“I think the whole thing about this being my club that I’ve supported all my life has worked against me, in that it has put more pressure on me and I struggled at first to handle that. By that I mean I put too much pressure on my own shoulders.

“It’s been hard to take and the goal (on Sunday) was just a chance to let it all go. It was brilliant.

“Obviously I’ve been desperate to play but I’ve not regretted coming here for a second. I feel I’m in a better place now and my confidence is back.”