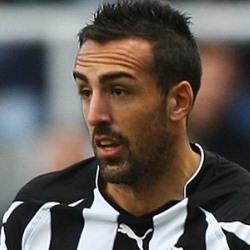 It has been revealed that Jose Enrique is on the brink of becoming the second Toon twit to quit Newcastle by signing for Liverpool.

It is said that the Kop are close to agreeing an £8million deal with the Geordies – and hope to seal the switch in the next 48 hours.

It is strongly believed that the Spanish left-back, who is also a target for Arsenal, is desperate to follow Joey Barton out of St James’ Park.

And, just like the Scouser, Enrique was fined a fortnight’s wages for blasting owner Mike Ashley on Twitter.

Enrique has to agree personal terms but expects to be a Liverpool player for the start of the Premier League season.

His impending arrival will take Kenny Dalglish’s spending this summer past £60m.

Enrique, 25, has been desperate to quit Newcastle after failing to agree a new deal.

His contract runs out next summer so Ashley wants to cash in rather than see the Spaniard go for nothing next year.