It has been reported that Liverpool boss Jurgen Klopp believes he can bring Bayern Munich striker Robert Lewandowski to Anfield. 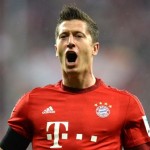 Klopp worked with the Poland international at Borussia Dortmund before losing him to Bayern.

The Sunday Express reported that Lewandowski has indicated that he would love to work under the charismatic Klopp again, especially now the 48-year-old has moved to the Premier League.

Arsenal and Manchester United are also interested in the Polish goal machine but Klopp would have a head start.

Bayern will insist on £60 million to sell Lewandowski. Aston Villa’s Westwood Expecting Benteke To Be Handful For Arsenal