It has been reported that Liverpool are set to offer £20million for Barcelona ace Alexis Sanchez. 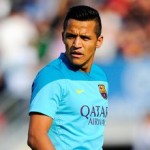 The Daily Star reported that the Reds will test the resolve of the Catalan giants as they seek to lure the 25-year old Chile international to England.

Sanchez, who has also attracted the interest of Arsenal, remains part of the plans for the future at Barcelona but Reds boss Brendan Rodgers is hoping to at least sound out the Blaugrana regarding the possibility of a transfer.

The former Udinese star currently earns around £90,000-a-week at the Nou Camp meaning Liverpool would have to make a significant offer to lure him to Anfield.