Reports are out claiming that Liverpool are in talks with Bayern Munich for Xherdan Shaqiri. 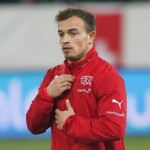 20 Minuten reported that a deal is close for the Bayern Munich man with talks ongoing.

It is said that the 22-year-old has fallen out of favour somewhat at the Allianz Arena and is said to be keen on a switch to the Premier League.

Manchester United were said to be keen on him also but Louis van Gaal’s arrival as boss is said to have cooled that interest leaving the way seemingly clear for the Reds.