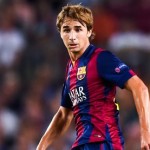 Reports have emerged claiming that Liverpool have thrown their hat in the ring as the chase for Barcelona’s Sergi Samper heats up.

The Express reports that the Reds are showing considerable interest in the 20-year old midfielder who has been labeled as the ‘next Cesc Fabregas’.

Arsenal and Chelsea have already been heavily linked with Samper but it is believed that Liverpool have emerged as the frontrunners.

Samper feels he is not developing rapidly enough with the Catalan giants under Luis Enrique and is pondering a potential departure in the summer.

Jay Rodriguez Backed To Step Up Against Arsenal