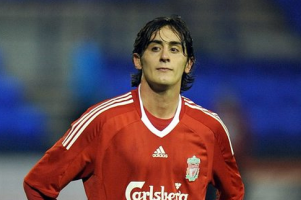 The 25-year old midfielder joined the Reds from Italian outfit AS Roma with an ankle injury and has struggled to regain full fitness since landing at Anfield.

Recent reports have suggested that Benitez was to hand Aquilani a start in this Saturday’s home clash with Manchester City but the Spanish tactician wants to remain patient with him so he does not re-injure his troublesome ankle.

Benitez told reporters that Alberto Aquilani wants to play for Liverpool and that he is so desperate to be involved as quickly as he can but he understands the reasons he cannot start yet.

The manager also said that Aquilani wants to keep improving his condition and now it is just a matter of him keeping calm as it will not be long before he is there.

Benitez also said that Aquilani is very positive and wants to help the team now but you must remember that we have a responsibility to him, and we will not take any risks at this stage.

The Spaniard also said that Liverpool have got to keep analysing the situation and watching him in every training session but we know that the right time is nearly here.

Benitez also revealed that Aquilani has a very good mentality.

Roy Hodgson : We Need Another Striker!