According to reports on Sky Sports News, Liverpool are in talks with Serie A side Fiorentina over the sale of striker Fabio Borini. 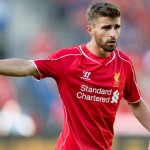 The 24 year old Italian international was Brendan Rodgers’ first signing at Anfield for £11m from Roma in 2012.

But Borini has scored just three times in 38 games for the Reds, and spent the 2013-14 season on loan at Sunderland, where he scored 10 goals.