Reports have emerged claiming that Liverpool will hold talks with Jurgen Klopp sometime this week. 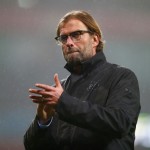 Sky Sports suggests that the Reds hierarchy will speak with the German before the weekend as they seek to find a replacement for the sacked Brendan Rodgers before the next round of Premier League fixtures.

Former Borussia Dortmund boss Klopp, who is enjoying a break from the management game, has recently indicated he would love to take up a job in England’s top flight and could be swayed to take the reins at Anfield by club owners Fenway Sports Group.

Liverpool are also keen on Carlo Ancelotti, who parked ways with Real Madrid last summer, and have sounded out his representatives about the Italian’s availability.

The Reds sit 10th on the league table ahead of their next league fixture against Tottenham Hotspur on October 17.